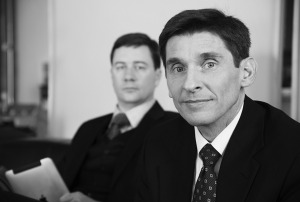 Dan was born and raised in Saint Paul, just minutes from his current office.  He graduated from Breck School after a stint as an exchange student in Germany.  He majored in biology and political science at Carleton College and spent a summer studying in Geneva, Switzerland.

Dan got married and moved to the Czech Republic, where he taught law and business classes at Charles University, the oldest university in continental Europe.  After two years in Prague, Dan opened the solo law practice in Minneapolis to which he devoted the eighteen years preceding the founding of Kennedy & Cain.

Dan also continues to teach.  He leads an international contracts seminar each spring at the University of Minnesota Law School.

Dan lives in Saint Paul with his wife and two children.  He also serves as president of a small medical device company that co-offices with Kennedy & Cain.

Longfellow Business Association (Board member since 1995)

German, Czech, French (in that order of competence)